Who were the greatest Women Warriors in Indian History? 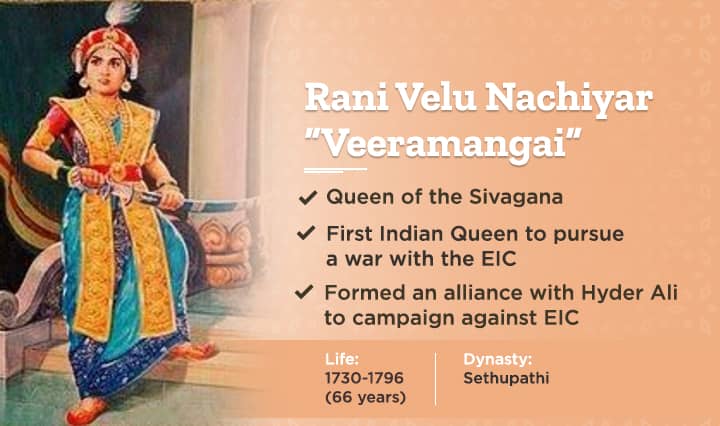 Rani Velu Nachiyar, know as 'Veeramangai' (brave women) by the Tamils, was the Queen of the Sivagana Estate (1780-1790). Velu Nachiyar was the first Indian Queen to pursue a war with the East India Company. She practiced many combat methods and martial arts like Valari, Silambam, including war weapon usage, archery, and horse riding. Velu Nachiyara's husband 'Muthu Vaduganatha Periyavudaya Thevar' was killed in a battle with EIC soldiers.

She formed an alliance with Hyder Ali to campaign against the East India Company. After she found the place where the EIC stored some of their resources; she arranged a suicide attack on that place to blow it up. After that, Velu Nachiyar inherited her husband's kingdom and ruled it for ten years. 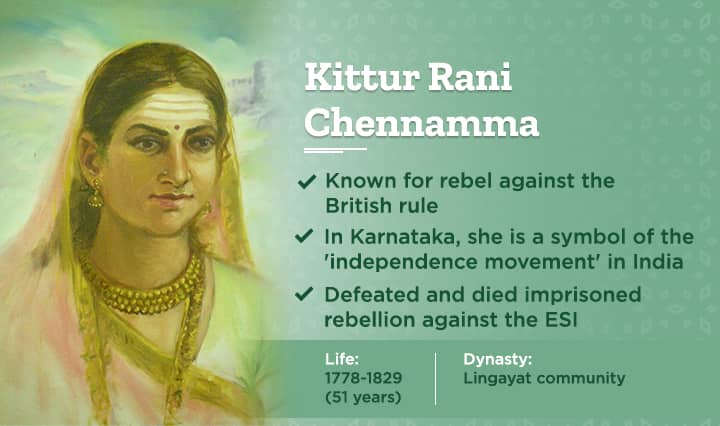 Kittur Rani Chennamma was the Indian queen of Kittur, a princely state in present-day Belagavi District, Karnataka. After death of Rani Chennamms's husband and son, she was left with an uphill task (maintain Kittur's independence from the British).

Rani Chennamma fought fiercely with the support of her deputy, Sangolli Rayanna & her adopted son Shivalingappa. She was defeated and died imprisoned by the British as she led an armed resistance against the British East India Company in 1824.

Her legacy and first victory are still remembered and celebrated in Kittur, during the 'Kittur Utsava' held on 22–24 October every year. 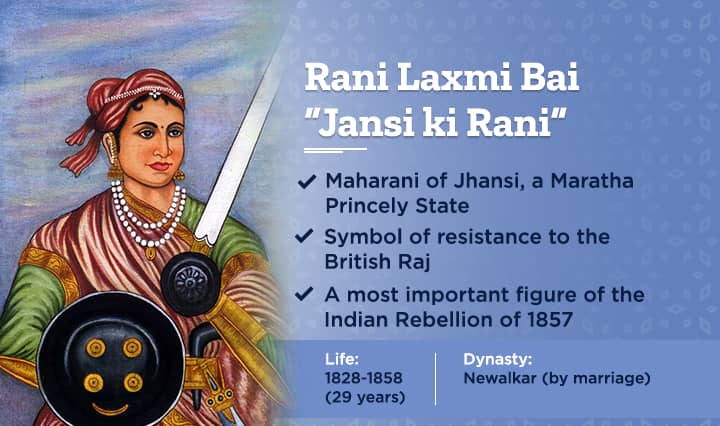 Rani Laxmibai, also known as 'Jhansi ki Rani' (the queen of Jhansi), wife of Maharaja Gangadhar Rao, became the Maharani of Jhansi, a Maratha Princely State. She is one of the foremost figures who opposed the British Raj. She became a symbol of the Indian Rebellion of 1857 and opposition to the British Raj. She was wounded and killed in a battle revolting against the British Raj. 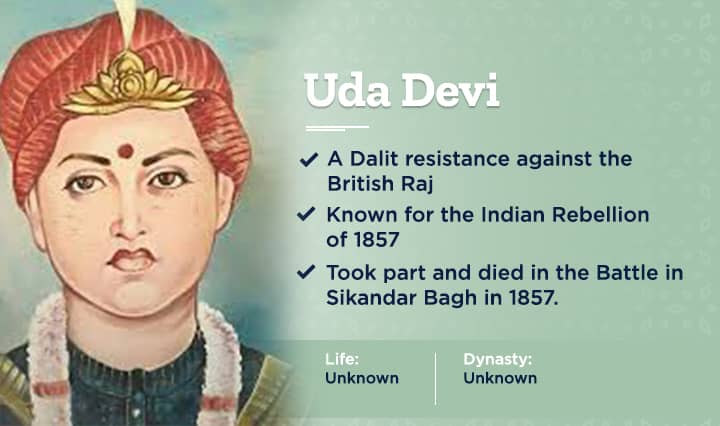 Uda Devi was a Dalit warrior of the Indian Rebellion of 1857 who revolted against the British Administration/ East India Company. While the histories only highlighted the upper caste resistance contributions like Jhansi Rani, Dalit resistance like Uda Devi was also fighting the battles for independence from British Raj. Seeing the increasing anger of the Indians with the British rule, Uda Devi reached out to the queen of her district, Begum Hazrat Mahal, and enlisted herself for the war.

The Begum helped Devi form a women’s battalion under her command and prepare for the upcoming battle. She and her husband 'Makka Pasi' were part of the armed force. She unleashed her final attack in full force when she heard that her husband had died in the battle. 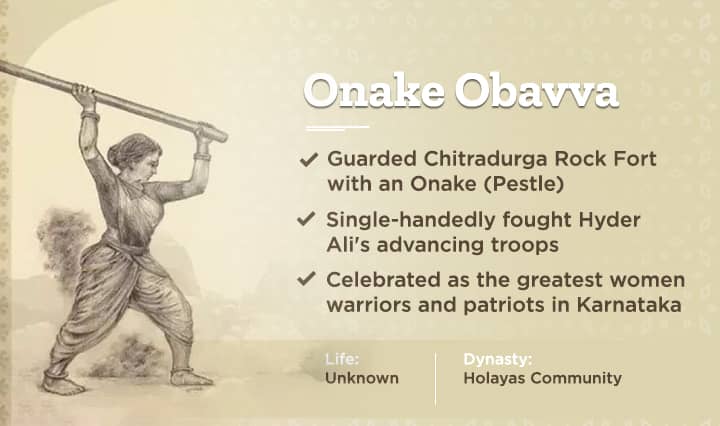 Onake Obavva was a brave woman who single-handedly fought Hyder Ali's army with an Onake (pestle) in the kingdom of Chitradurga in Karnataka. Her husband was a guard of the watchtower in the rocky fort of Chitradurga. During the rule of Madakari Nayaka, Chitradurga was attacked by Hyder Ali's troops.

Hyder Ali saw a man entering Chitradurga fort through a hole, which led to sending his soldiers. While fetching water in the pond near the hole, Obavva noticed the army trying to enter the fort through the hole. She used her Onake and attacked them one by one by hitting them on the head and quietly moving the dead without raising suspicions for the rest of the troops.

Later that day, she was found dead, maybe due to shock killing so many/ getting killed by the enemy. Though Obavva's brave attempt saved the fort that time, Hyder Ali captured the Chitradurga fort in 1779. 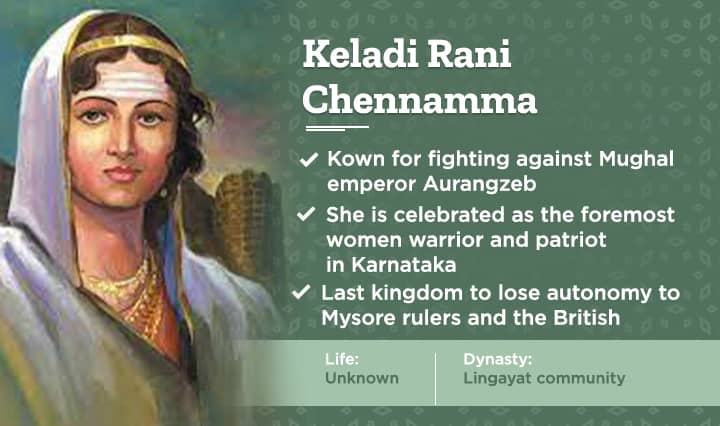 Keladi Rani Chennamma was the queen of the Keladi Kingdom in Karnataka. After her husband Somashekhara Nayaka's death in 1677, Chennamma efficiently commanded the administration of the Keladi Nayaka dynasty. From her army base in the kingdom, she resisted the advance of the Mughal troops led by Aurangzeb.

She made a trade agreement with the Portuguese regarding commodities like pepper and rice. She also permitted the Portuguese to establish churches at Chandravara, Mirjan, Honnavara, and Kalyanpura.

She offered shelter to Rajaram Chhatrapati (son of Shivaji), who was escaping from the Mughal emperor Aurangzeb. She fought the war without defeat, and the battle with Mughals ended in a treaty. Keladi was the last kingdom to lose independence to Mysore rulers and consequently to the British.