Who were the greatest kings & warriors in Indian History? 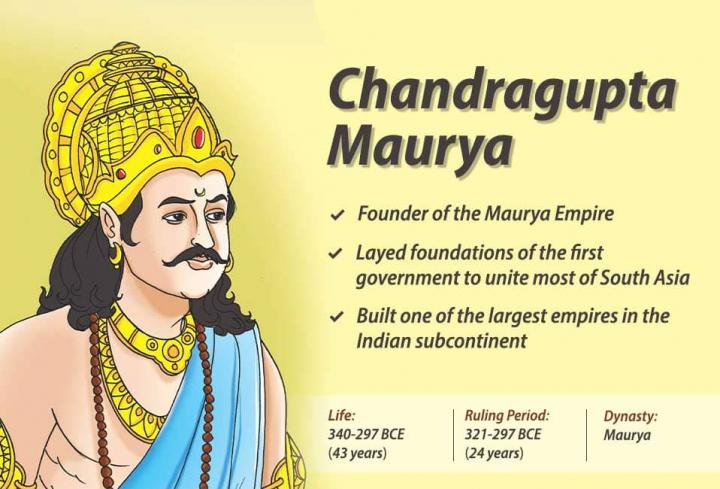 The founder of the Maurya Empire, Chandragupta Maurya, built one of the largest empires in the Indian subcontinent. Chandragupta was one of the most important personalities in Indian history, laying the foundations of the first government to unite most of South Asia. Under the guidance of Chanakya, he created a new empire based on the principles of statecraft; he built a large army and continued to expand his boundaries until his final years. 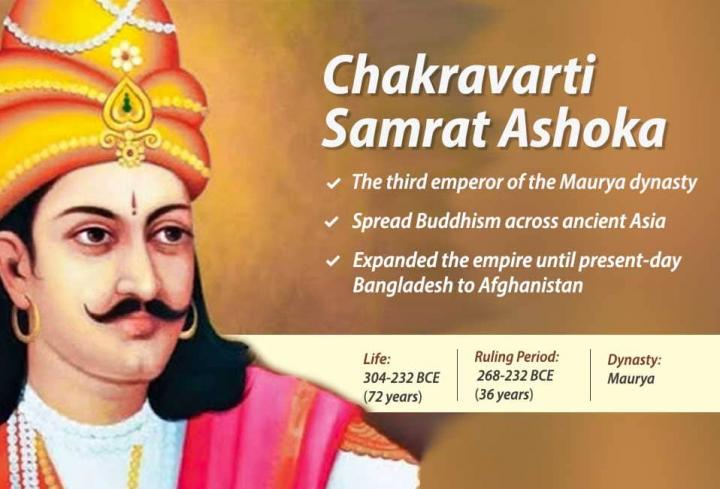 The grandson of Chandragupta Maurya, Ashoka was the Maurya dynasty's third emperor; he spread Buddhism across ancient Asia. He was considered one of India's greatest emperors; he expanded the Maurya empire until present-day Bangladesh in the east to Afghanistan in the west. He conquered most of the Indian subcontinent except parts of Tamil Nadu, Kerala, and Karnataka.

After the devastating war against Kalinga (Odisa), seeing the deaths of 1000's of people, he converted to Buddhism. Ashoka is known for building the Ashoka pillars to spread his orders about Buddhism. 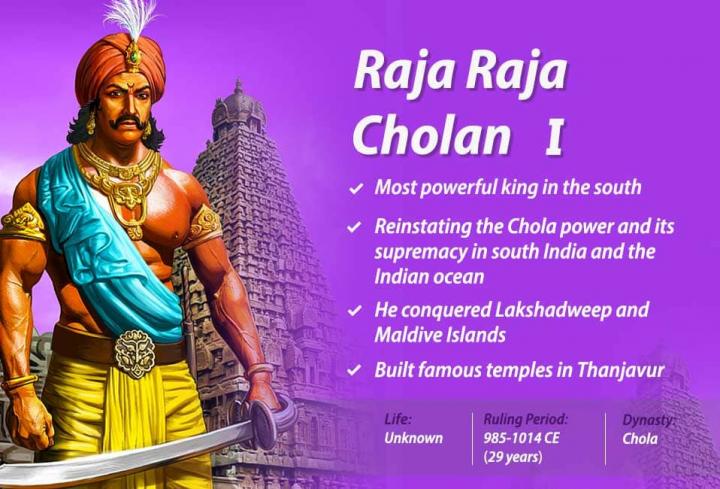 Raja Raja Chola I, belonging to the Chola dynasty, was the most powerful king in the south. His time was remembered for reinstating the Chola power and ensuring its supremacy in south India and the Indian ocean. His kingdom included parts of Pandya's land, Cher's land, and northern Sri Lanka; he also conquered Lakshadweep and Maldive Islands. Raja Raja Chola I was the greatest devotee of Lord Shiva; he built several temples standing still in modern-day Tamil Naidu. One of the most famous temples he built was Brihadeeswara Temple, popularly known as the Thanjavur Periya Kovil. 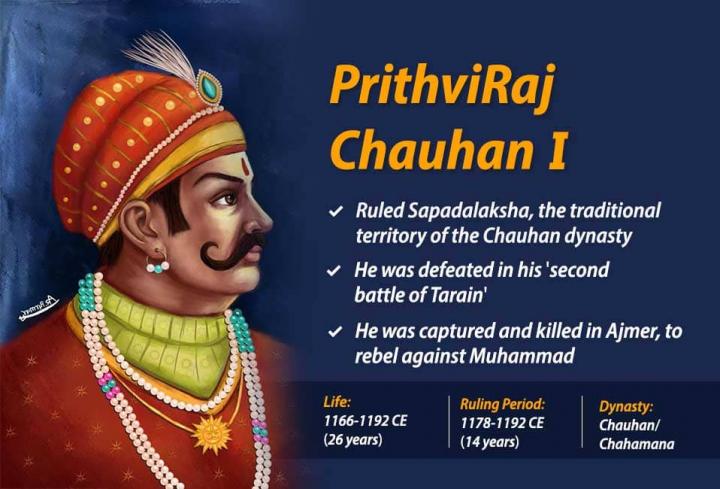 Prithviraj Chauhan I was a king from the Chahamana/ Chauhan Dynasty. He ruled Sapadalaksha (traditional territory of the Chauhan dynasty), present-day Rajasthan, Haryana, & Delhi; some parts of Punjab, Uttar Pradesh, and Madhya Pradesh. Soon after Prithviraj became the ruler, he faced rebel from his cousin, Nagarjuna. Prithviraj was defeated in his 'second battle of Tarain'; he was captured & taken to the Chauhan capital Ajmer, killed for rebel against Muhammad. 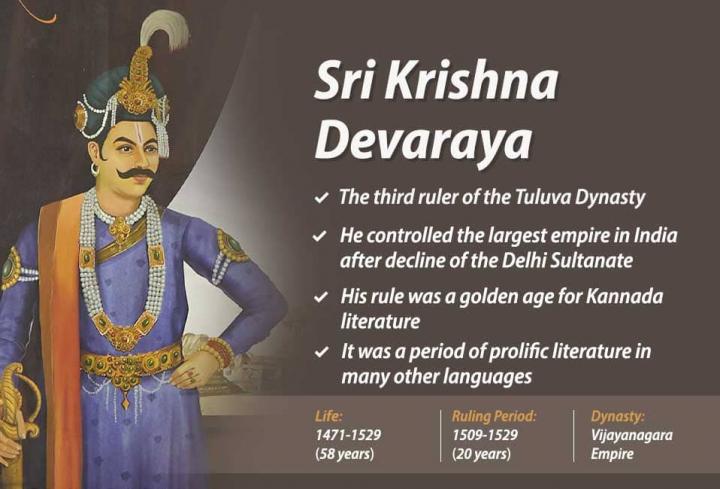 The emperor of the Vijayanagara Empire, Krishnadevaraya, was the third ruler of the Tuluva Dynasty; he was considered to be its greatest ruler of the Tuluva Dynasty. He controlled the largest empire in India after the decline of the Delhi Sultanate. Leading over the kingdom at its peak, he is recognized as an icon by many Indians. He became the most dominant ruler of the peninsula of India by defeating the Golconda, Bahmani Sultanate, Sultans of Bijapur, and the Gajapatis of Odisha; he was one of the most powerful Hindu rulers in India. His rule was a golden age for Kannada literature and a period of prolific literature in many other languages. 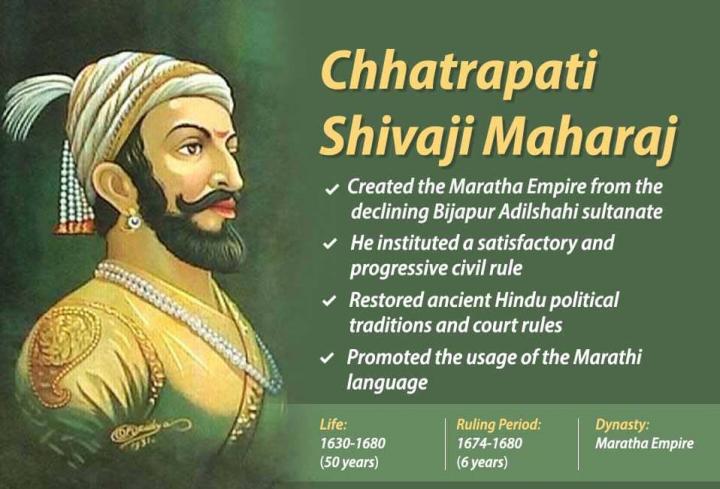 Shivaji Bhonsale, popular known as Chhatrapati Shivaji Maharaj, was an Indian king and a member of the Bhonsle-Maratha clan. He created an enclave from the declining Bijapur Adilshahi sultanate, which set the beginning of the Maratha Empire. He was formally crowned the Chhatrapati (emperor in the Marathi language) of his realm at Raigad, in 1674.

He engaged in alliances and hostilities with the Sultanate of Bijapur, the Sultanate of Golkonda, Mughal Empire, and European colonial powers throughout his life. He instituted a satisfactory and progressive civil rule with well-structured administrative organizations. He restored ancient Hindu political traditions and court rules and promoted the usage of the Marathi language.